A downloadable game for Windows, macOS, and Linux

Steelbreakers is an action game in the vein of some of the classics I grew up with, with a new competitive multiplayer spin! Hack, slash, shoot and run to defeat your opponents and emerge victorious, or team up to defeat monsters and survive!

- Play with up to four players on various maps.

- Customize your weapon loadout and defeat your opponents!

- Team up, cooperate, or stand alone against hordes of enemies or against each other!

- Choose from various objectives to experience each level in a new way!

The full release of the game will include additional features such as netplay(?), additional game modes, new maps, weapons, AI enemies, music and additional quality of life improvements. Please try out the demo in the meantime!

Hi, I'm very interested in your game and had a few questions about the future plans for it. Is there a best way to contact you?

Sure! In the More Information section of this page, you can click the Community link to join the Discord server where I post updates on the game. You can talk to me there or PM me after you join.

The game modes available in the demo are multiplayer only. A controller is required for each additional player, and one can use the keyboard. The full game will have additional game modes that support a single player with either type of device.

Hey there! I’ve released a new version of the demo that includes a single player mode if you want to try it out without needing a controller.

Before a match, you select your loadout and map various weapons to certain button inputs. Once in-game, most actions have a tap, hold, and release action. Some weapons let you strafe while holding while other might root you in place. Some actions are tap-only. You can dodge roll to get invincibility frames using the dash button (LB/Tab by default). You can also parry with the parry button (RB/R key by default) to gain a few frames of invincibility and temporarily stun enemies that melee attack you.

I have a How to Play menu on a development branch** but it hasn’t made it to the demo yet since I’m working on other things at the moment, but hopefully that helps you for now!

**EDIT: The latest demo now includes the How to Play menu mentioned above.

how do i use the mac version?

Hey there. New versions of macos complain very loudly about every library used by the game because the OS “can’t verify the developer”.

The easy way to run the game on Mac is to install the itch.io app and download and launch the game from there. It will handle all of the heavy lifting and should be as easy as push-and-go. I recommend doing it this way. It’ll also automatically download updates when new builds are pushed so that you’re up to date.

The hard and annoying way is to download the zip and extract it, then run the Steelbreakers unix executable, then go through each of those notifications and open System Preferences > Security & Privacy and for each one of those popups, hit Cancel or Open (not Move to Trash) and keep pressing Allow Anyway in the settings window after each one. I recommend the itch app instead if you value your time, since it’s a very tedious process. 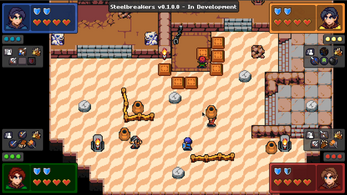